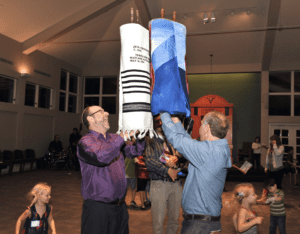 Temple Shir Tikva is home to 4 Torah Scrolls. The oldest is on permanent loan from the Memorial Scrolls Trust, Westminster Synagogue in London. This Torah was saved from the Holocaust, and before the war, belonged to the Jewish community in Jicin, a town the size of Wayland, north of Prague, Czechoslovakia. The Torah was rededicated in Wayland on May 16, 1980, before Shir Tikva had a permanent home. The Memorial Scrolls Trust celebrated its 50th anniversary in February 2014 where Rabbi Gold and several TST members travelled to London with the Torah to mark the occasion.

Our Holocaust Torah is covered in white velvet with black bands and words commemorating its origin in Jicin, Czechoslovakia.

In 2018, the congregation commissioned artist Jeanette Kuvin Oren of Woodbridge, CT, to create a new ark curtain. The Tree of Life (Etz Chaim) depicted on the curtain reflects the living trees visible from the high windows in the Sanctuary. She had previously created the 3 Torah covers in 2010.

“[Wisdom] is a tree of life to them that lay hold upon her, and happy is everyone that holdest her fast.” – Proverbs 3:13-18

Traditional silver Torah crowns, yads, and the breastplate were inherited through congregants from Temple Anshe Poland, founded in 1983 in Boston’s North End. 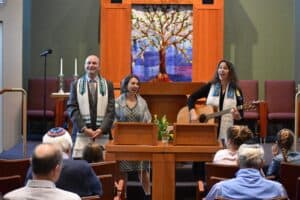 A second Torah was dedicated in 1985, and a third in 1995. On 2004, on the occasion of our 25th anniversary, TST commissioned a new Torah from Soferim Benyamin in Isarel and Rabbis Gedalya and Moshe Druin of Florida. Over the course of a year, our community engaged in the study of creating a Torah and wrote letters in the Torah in the traditional manner.