Board of Trustees Meeting Drash: Sh’mini

This week we read Sh’mini (the Eighth Day).  To briefly summarize this portion, Aaron and his sons follow Moses’s instructions and offer sacrifices so G-d will forgive the people.  Two of Aaron’s sons, Nadab and Abihu, offer “alien fire” to G-d and G-d punishes these two priests by killing them immediately.  G-d forbids Moses, Aaron, and his surviving sons from mourning but commands the rest of the people to do so.  Priests are told not to drink alcohol before entering the sacred Tabernacle and are further instructed about making sacrifices.  Laws on kashrut practices are given to distinguish between pure and impure animals, birds, fish, and insects.

There’s lots here that is Biblically relevant but also violent and upsetting.  In the course of the narrative, this portion demonstrates incidentally the dual purposes of belonging and distinction embodied in sacred sacrifice.  The Hebrew word for “holy” (kadosh) is often translated as “distinct, separate, or different,” even as the word for “sacrifice” (korban) more literally means “that which makes close or draws near.”  There’s a juxtaposition between separation and closeness.

In this portion, “Aaron lifted his hands toward the people and blessed them; and he stepped down after offering the cleansing offering, the burnt offering, and the offering of well-being.”

Rabbi Levi Yitzhak (the 18th century rabbi, appropriately from Berdichev, Ukraine) reads these words as a reflection on power and purpose, meaning that one path of righteousness is to focus on distinction and separateness.  Aaron’s path is to remove himself from the people, keeping away signs of the mundane, so that holiness may be held in isolation.  So Aaron, in observing this separation and distinction, stands apart, unengaged from the collective.

But Rabbi Yitzhak notes (and I agree) this is not the highest form of holiness.  Our highest form of holiness is realized when an individual links herself or himself to a collective, moving from isolation to integration, from distinction to connection.  Rabbi Yitzhak says “The divine presence essentially comes to dwell on a person when one leads the people and engages with each and every one, seeking to create connection with the blessed Creator, each and every one according to his or her level.  Then, through the merit of the entire community reaching together towards teshuvah the Holy One causes the divine presence to dwell with us.”  This is suggested by the verse, “Moses and Aaron went inside the Tent of meeting; when they came out, they blessed the people, and the presence of the eternal appeared to all the people.”  That is, they were in a place separate from the people and then they came out and engaged with them.

Holiness through engagement, through human connection.  This is where it becomes personal. 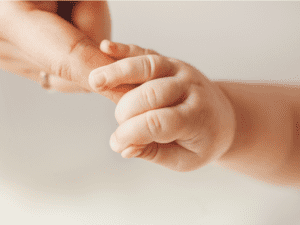 My elder son, Ben, who last year attended the Early Learning Center and is now a Claypit Hill kindergartener, was born 14 weeks early after my water broke on the literal day of viability, 24 weeks and zero days.  It was a rocky start for Ben, and a fairly traumatic introduction to parenthood for me and Adam, occurring after several years of infertility, loss, and challenge.

We were living in Rochester, New York, at a physical distance from most family, but we did have a remarkable community of what my mom refers to as “family by choice.”  As is common in these circumstances where one family is suddenly thrust into crisis, friends were eager to be helpful but did not know where to start.

What could people possibly do to help?  It was a fair question for them as well as for us and we were paralyzed by uncertainty about what to even suggest.  Our initial instinct was to retreat – to separate, and keep isolated.  The distance seemed cavernous between our daily life of hospital alarms, organ system failures and endless uncertainty – and our friends’ ordinary trips to the lake, the movies, and yoga class.

I received some advice from a couple of friends for how to be proactive in giving people a door or a window into our situation – how to find a way to engage.

A friend who had some earlier experience with the NICU, imparted valuable advice to pick out a children’s book, inscribe it to Ben, and send it to us.  Another friend of a friend who parented a premie advised creating a blog – that way, we only had to report the news once.

These tiny steps were transformative, and led to an outpouring of warmth from our community.  Ben’s library, which rapidly assembled in the months before he was able to come home, grew to include almost every children’s book ever written.  We loved seeing which books had special meaning to which friends and what they wrote inside.

Our blog amassed more than 100 followers who read our daily updates.

A neighbor organized a MealTrain for us so that several nights a week we didn’t have to worry about cooking, and could eat non-hospital food on a quick break to let our dog out after work before returning to the hospital.

A colleague whom I barely knew overheard me mentioning at work (Ben was hospitalized for 21 weeks, and I had to return to work after eight weeks of short-term disability) that our dog spent seven days per week at daycare.  She arranged to visit our house the following Sunday to pick up my dog and a key, and committed to make a rotating schedule with another family so our beloved golden doodle had a change of scenery and care givers every weekend.

Another friend sent a pack of $5 Starbucks gift cards, suggesting that if we didn’t use them, perhaps we could share them with some of the nursing staff.  A friend arranged for me to get a haircut in my house so I didn’t have to invest the time and energy to go to a salon.

The same friend who had given me the idea about inscribing books rearranged travel for his book tour so that he had a layover in Rochester on the way from northern California to New York.  He didn’t ask, he just told me that he would be in town for the day and was at my disposal.  He would do runs to Target or a grocery store if I needed that, or would come to the hospital if we wished.  Or he would just sit in his hotel room and enjoy the peace and quiet.  I could not convince him to stay at our house, but I was so grateful for his company all afternoon at the hospital and for dinner.  That visit felt so special and normal at the same time – I felt momentarily reattached to reality.

I felt similarly when neighbors welcomed us for holidays and made clear we could come and go as we pleased so we could prioritize getting back to the hospital.

Ben’s stay lasted 147 days.  Our daily lives were a blur of hospital visits interrupted by eight-hour intervals to show up for our work days.  We were exhausted.  But we felt utterly buoyed by an enormous community presence.

The amazing thing was the exponential – in fact logarithmic – power of tiny choices individuals around us made.  MANY people in our orbit did ONE thing.  Lots of people did two things.  And a few truly remarkable people did three (or more) things.  But what they perceived as drops in the ocean had the cumulative effect of blanketing us with support and sustaining us over many months.  A line from the Babylonian Talmud that Rabbi Jordi shared with me resonates here, especially as we cautiously start to emerge from so many months of social isolation: Kol Yisrael averim zeh ba-zeh, “Our fates are tangled up in one another’s.”

I share this as an illustration and a reminder of the unbelievable power of collective action.  Our instinct is often to assume we could never do enough.  When others experience hardship, crisis, tragedy – there is no action we can think of that will take away the pain or ease the burden.  But, in fact, we’re not powerless.  What we can do is start tiny and remember that the impact of one tiny step taken by many people is actually quite substantial.

I regularly have the experience of reading books to Ben and his younger brother at night and having a chance to re-read inscriptions from Ben’s NICU time.  And immediately I’m transported into a feeling of gratitude.  I’m awed that these small gifts have multiplied in value and persist six years later.

I spend a lot of my personal and professional energy thinking about building bridges – between differing viewpoints, lived experiences, and ideologies.  There is so much broken in the world that it’s often hard to know where to start – Ukraine being a perfect example.  This evokes the line from Pirkei Avot – “It is not your duty to finish the work, but neither are you at liberty to neglect it.”

Tiny steps cascade into collective action and galvanize transformative movements.  I’m reminded of Senator Robert Kennedy’s “ripples of hope” speech in Cape Town in 1966: “It is from numberless diverse acts of courage and belief that human history is shaped each time a man stands up for an ideal or acts to improve the lot of others or strikes out against injustice.  He sends forth a tiny ripple of hope, and crossing each other from a million different centers of energy and daring, those ripples build a current that can sweep down the mightiest wall of oppression and resistance.”

In our lives and daily dealings, in our practices and rituals, we should strive to see the world as opportunity for connection.  Whenever we find ourselves stuck in indecision about how to make enough of an impact, we should remember that doing one thing is enough.  Just showing up; finding a small way to be present.  When we move from isolation to integration, and distinction to connection, G-d comes to dwell among us, and we can truly change lives.